OPR World Inc. is pioneering Ocean Pasture Restoration (OPR) technology to be ‘good shepherds’ of the world’s ocean ecosystems, while mitigating and reversing climate change. Our innovative nature-based solutions deliver  large-scale ocean eco-restoration, and regenerates the oceans to the state of health, productivity, and biodiversity.

Our privately financed public-private-partnership businesses are good news for the planet. As a for-profit enterprise, we intend to become major taxpayers that will benefit communities worldwide.

Ocean pastures nourish and sustain life on 72% of this blue planet, and they are in desperate trouble as evidenced by catastrophic declines of fish, seabirds, whales, and almost every form of ocean life. Climate change has had disastrous effects on the ocean ecosystem, including reduction of micronutrients (especially iron), ocean warming, and acidification. High and increasing levels of anthropogenic CO2 have disrupted the natural processes to replenish micronutrient dust needed for growth of phytoplankton life.

Collapse of the ocean’s green phytoplankton, responsible for the majority of global photosynthesis, is turning what once were lush green ocean Gardens of Eden into clear blue lifeless ocean deserts.

OPR teams made up of fishermen, scientists, and business people are now working to repeat our dramatic success of ocean pasture restoration to bring fish back to ocean pastures around the world to historic levels of health and abundance every year.

Referencing the chart below, the arrow points to where the first restored ocean pasture in the Gulf of Alaska occurred–about 5,000 sq. miles of the 600,000 sq. miles of the Gulf. The circle shows the result in hundreds of millions of additional Pink Salmon that were caught in Alaska because of this pasture restoration. 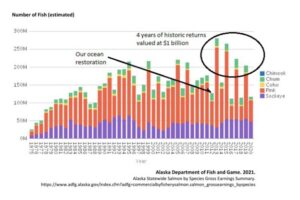 In 2012, Ocean Pasture Restoration produced the largest catches of salmon in Alaskan history! These bountiful catches injected upwards of a billion dollars of economic stimulus into the Alaskan economy.

OPR is not just about restoring fish to historic number for fisheries and human consumption, an equal or larger benefit is delivered to all of ocean life.

In addition to the salmon; other fishes, such as pollock, black cod, ground fish, herring, and eulachon will all return to historic high numbers. The replenished and restored pasture will sustainably feed all ocean life: the seabirds, whales, seals, sea lions, bears, everything, including people.

Restoring ocean pastures is vital to sustain fish in the world’s oceans, and all of ocean life.

Ocean plankton blooms in the Gulf of Alaska, have been diminishing and disappearing dramatically for more than 50 years. The deadly toll of lost ocean plant life is 100 times greater than the toll of global deforestation. Plankton is the grass of ocean pastures. It feeds all of ocean life, from the tiniest copepod and krill to the largest whale.

Poet Walt Whitman wrote,
“All beef is grass.”
We remind you,
“All fish is plankton.”

Around this blue planet ocean plankton is dying because humanity’s CO2 has made the grass that covers pastures on land grow more abundant. While this greening is good news for the land, it is terrible news for the oceans.

It is the dust from the land that blows in the wind that nourishes ocean plant life. The world’s cataclysmic drought of dust is starving ocean life to death.

Our work is to replenish some part of the oceans vital missing mineral dust and in doing so sustainably restore this blue planet’s oceans to health.

Restoring ocean pastures captures tens of millions of tonnes of CO2 per pasture!

By providing a vital food source within the targeted ocean pastures, deadly CO2 that causes ocean acidification and other detrimental effects is then repurposed into new (plant and animal) ocean life. A significant portion of the CO2 that is captured from these revived ocean pastures is sequestered into the deep thermocline layer for hundreds to thousands of years, thereby removing 10s of millions of tonnes of deadly CO2 in the ocean/atmosphere with each pasture restoration.

It Just Works! Some unexpected benefits.

The state of Alaska has reported the additional catch delivered more than half a billions dollars of economic stimulus, a blessing to the state economy. So much fish was on hand that the U.S. Department of Agriculture started buying large amounts of the “surplus” salmon to make space in the fish processing industry to handle more fish.